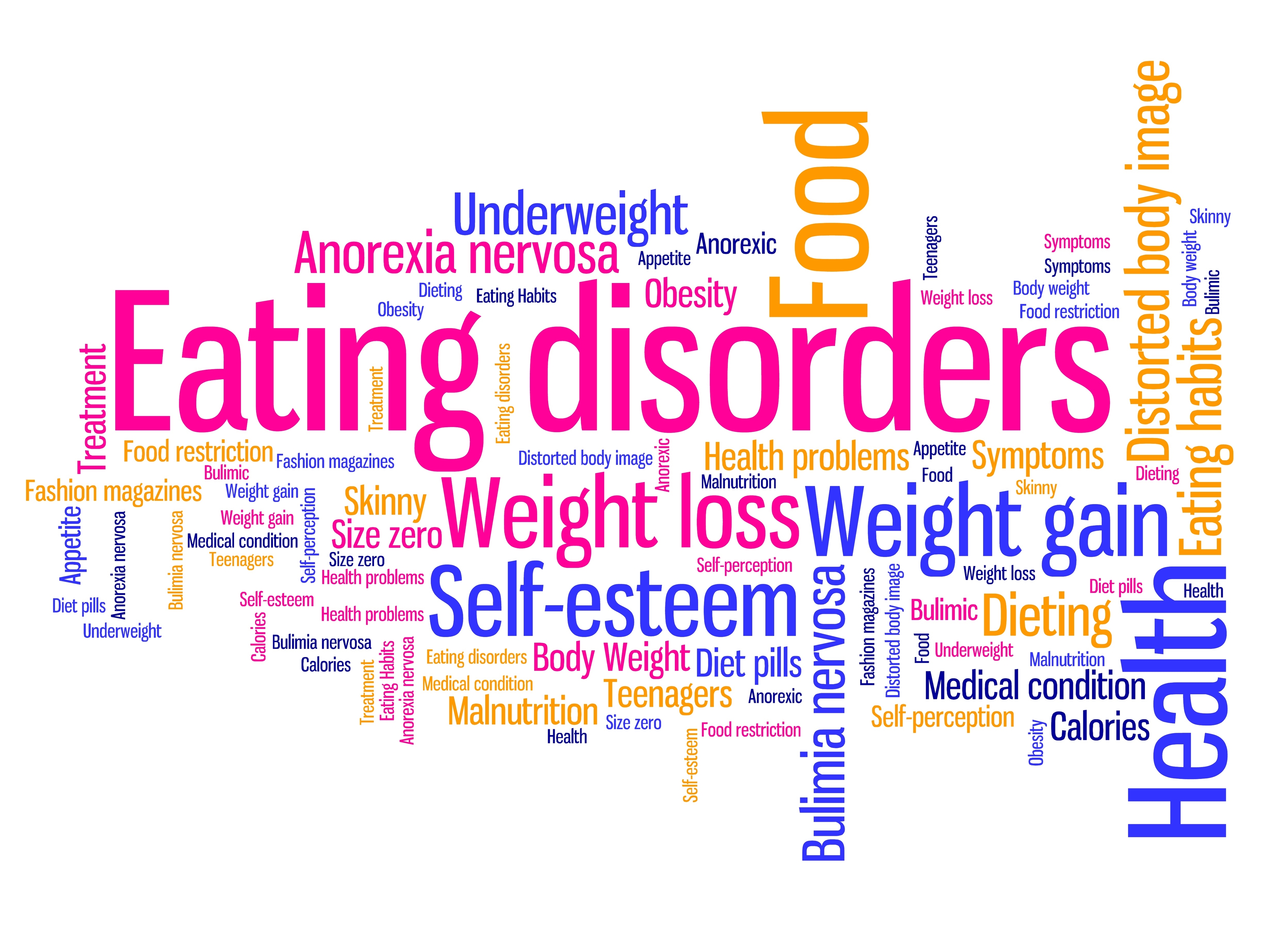 Signs and Symptoms of Anorexia Nervosa

People with bulimia nervosa have recurrent and frequent episodes of eating unusually large amounts of food and feeling a lack of control over these episodes. This binge-eating is followed by behavior that compensates for the overeating such as forced vomiting, excessive use of laxatives or diuretics, fasting, excessive exercise, or a combination of these behaviors. Unlike anorexia nervosa, people with bulimia nervosa usually maintain what is considered a healthy or relatively normal weight.

Symptoms of Bulimia Nervosa include:

Symptoms of Binge-Eating Disorder include:

Eating disorders frequently appear during adolescence or young adulthood but may also develop during childhood or later in life. These disorders affect both genders, although rates among women are higher than among men. Like women who have eating disorders, men also have a distorted sense of body image. For example, men may have muscle dysmorphia, a type of disorder marked by an extreme concern with becoming more muscular.

Cognitive Behavioral Therapy (CBT), Dialectical Behavior Therapy (DBT), and Family Based Therapy (FBT) have all been proven to help in the treatment of eating disorders. Adequate nutrition, reducing excessive exercise, and stopping purging behaviors are the foundations of treatment.

Treatment plans may include one or more of the following:

Avoidant/restrictive food intake disorder (ARFID) is an eating or feeding disturbance that is characterized by a persistent failure to meet appropriate nutritional and/or energy needs that leads to one or more of the following:

It’s also important to understand what ARFID is not. It is not :

Like other eating disturbances, there is no singular cause of avoidant/restrictive food intake disorder (ARFID). However, the evolving scientific literature suggests that this pattern of disordered eating develops from a complex interplay between genetic, psychological and sociocultural factors.

Eating disorders are familial illnesses, and temperamental traits predisposing individuals toward developing an illness are passed from generation to generation.

Symptoms of avoidant/restrictive food intake disorder (ARFID) vary widely, and may evolve with the developmental context of the individual (especially in children and adolescents).

Types and symptoms of ARFID include:

Seek a diagnosis if you have ANY of these ARFID symptoms

If left untreated, ARFID symptoms can build in intensity and seriousness, which is especially concerning for children and adolescents going through the most developmentally important stages of their life.

Health risks associated with (ARFID) include:

Many behavioral and psychological interventions have demonstrated promising effects for those recovering from ARFID and may include forms of exposure therapy, cognitive behavioral therapy and more.

Because underlying biological factors may influence ARFID, seeking out specialized care by a treatment team should be sought for full assessment and diagnosis. This may involve collaboration with a speech language pathologist, occupational therapist, physical therapist, and registered dietitian.

If you suspect that someone you care for may be suffering with a form of ARFID, it is important to express these concerns to a treatment specialist. A disturbance in eating patterns is not something that should be ignored, and seeking out treatment early can assist with intervention and recovery.

What is Body Dysmorphic Disorder?

It can be defined as a body-image disorder, where an individual has persistent and intrusive thoughts and/or preoccupations with an imagined or slight defect in their appearance. Typical areas of distress are hair, skin coloring, nose shape, chest, and stomach. Any area can be distorted with someone who has BDD. Typically, the area of focus is not distorted, it is a perceived defect, or there is a slight imperfection. The flaw, however, in the mind of someone with BDD, is grotesquely significant and noticeable to others. This can cause severe emotional distress, and often a person may spend several hours per day trying to cover up or conceal the defect before going out in public.

How Common is BDD?

BDD is typically seen first in teens and pre-teens, around the age of 12, and it affects both men and women equally. In the United States, body dysmorphic disorder occurs in approximately 2.5% men, and 2.2% women. Although more research is needed, BDD is thought to be both biological and environmentally developed. Some research has shown genetic predisposition, neurobiological factors, personality traits, and life experiences such as abuse and trauma can have an effect on the development of BDD. Even though BDD affects a rather small amount of the general population, it can be seen with eating disorders. Frequently many individuals who struggle with eating disorders have low self-esteem and poor body image . BDD can develop along with an eating disorder.

Connection Between Eating Disorders and BDD

Those with an eating disorder and BDD will spend many hours staring at their body and become fixated on a specific body part. Often methods to cover up that flaw or area is used, and the person will seek reassurance from others that they look okay. Frequently individuals with this dual diagnosis will begin to avoid social situations and leave their home less regularly for fear of others seeing and judging their flaw or body image. With most individuals, depression, anxiety, feelings of shame, and disgust accompany both disorders. With eating disorders, a person will have extreme worry and obsessive thoughts around body image, weight, and shape, where with BDD the person is concerned about a specific body part. Both, however, are long-term chronic disorders. In BDD, the focus typically tends to be around skin imperfections, such as acne, wrinkles, scars, and blemishes. It can also include skin tone. Hair type, body hair, or absence of hair is also an area of obsession. Facial features, most commonly the nose, can also include the shape and size of features on the face. Other common areas of perceived distortion are the genital area, muscle shape and size, breasts, thighs, buttocks, and body odor.

Some warning signs for those who may be concerned about a loved one or self are:

When the Mirror Lies

When the mirror lies, it can be difficult not to believe the negative thinking. Remember that BDD is manageable and treatable with psychoeducation, cognitive behavioral therapy, and dialectical behavioral therapy, to name a few. Learning how to manage distress, identify and process emotions is one way to help keep adverse behaviors at bay. Working with a treatment team is also crucial in the recovery process. Learning when the negative thinking is triggered, how to stop it, and finding your own empowerment through the process of healing can bring hope and success. Remember your self-care. Take care of yourself when you feel the negative and BDD thinking is taking over. Read a favorite book, listen to music, drink your favorite hot beverage, or cozy up on the couch for a favorite Netflix show. Being able to get out of your head and into something else can help with the healing process. It may be slow at times, but each step leads you closer to managing your disorder.